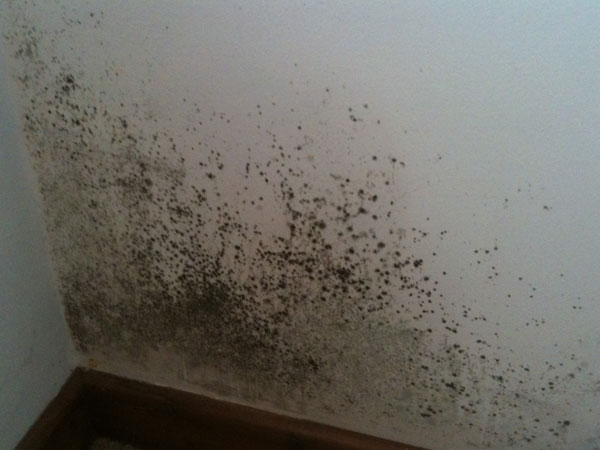 Why does mould grow in the home? There are many reasons. It could be caused by leaking plumbing pipes from behind walls or more than likely caused by high humidity or condensation problems. In the case of a plumbing leak usually you will see quite obvious evidence with the growth of the mould problem being physically next to a plumbing outlet, a tap or a waste area. You will need to cut a small section of plaster out of the wall to see where the leak is coming from.

Mould problems due to condensation and/or humidity are a lot easier to find. However the key to mould control is the control of moisture.

If you find a mould problem in your home you should get to the bottom of it immediately.

Mould will always land on a surface that is wet and will immediately multiply, as mould will not grow without moisture you need to get rid of any moisture problem that has arisen in your home immediately.

If you don’t know you need to be told – as mould is a fungus it grows to large colonies. Some moulds are toxic and can be a serious health hazard if left to multiply. Mould spores are so minute they cannot be seen by the naked eye and become airborne having the potential for serious complications to the respiratory system. The worst area for health problems is to have mould in or near a bedroom.

There is much information on the hazards of mould on this website.

If you find a mould problem low down on a wall or anywhere up to ¾ of the height of the wall the mould problem will either be from the subfloor – lack of ventilation under floor or a plumbing leak.

However if the mould problem is just below the ceiling or on the ceiling you can guarantee that it is due to condensation and/or humidity moisture coming from the roofspace. Remember the key to mould control is the control of moisture.

You need to have an efficient ventilation system to ventilate the roofspace. By allowing the ambient airflow to flow throughout the roofspace all moisture from the building materials in the roofspace will be allowed to dry out – moisture soaked insulation, roof timbers, ceilings and electrical components etc.

You need a ventilation system that allows the ambient air to flow throughout the roofspace with inlets and outlets. This allows fresh dry air to circulate the roofspace removing all the nasties like moisture saturated insulation etc. removing the breeding grounds for mould and mildew.
Once you have removed the source of moisture with a good ventilation system you need to kill the mould. The healthiest way for you to do this is to use white vinegar. Vinegar is non toxic and safer for you to use and more effective than harsher chemical mould removers. With the source of the moisture removed with a good ventilation system the mould removed with vinegar you will now need to paint the ceiling and/or wall with a mould resistant paint.

If you don’t get rid of the source of the moisture you will never get rid of the mould. For the only really effective roof ventilation system that moves the ambient air throughout the roofspace you need to look no further than the UNIVERSAL TILE VENTILATION SYSTEM.