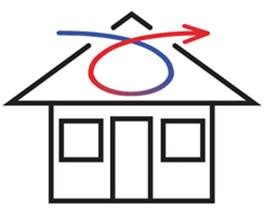 Australian houses in the 1940’s had ventilation in the walls at the height of the ceiling, quite often bathrooms ducted to outside atmosphere or bathroom vent windows and nearly always roof ventilators.

However with the emergence of supposedly smart buildings:- modern house building

we now have major problems due to the fact that natural ventilation has been forgotten in new home building, no more wall vents, no more ventilation full stop, maybe one or two token $50 whirlybirds that do nothing but spin like the salesman that sold it.

SO WHERE DOES THAT LEAVE THE POOR OLD HOMEOWNER – with a house wrapped up so tight without proper ventilation.

Maybe you would have a couple of ceiling vents, unless they are ducted to the outside atmosphere you will have minute ceiling insulation fibres and dust particles entering your home, this is not good adding to the problems of Sick Building Syndrome you will be breathing these fibres. You will more than likely have one or two bathrooms evacuating into the roofspace this is a bad situation in a tiled roof without sarking (sisalation foil) a real bad situation with a tiled roof with sarking and an outrageous situation with blanket foil insulation under a colorbond corrugated roof, these bathrooms should be ducted from the bathroom fan through the roof to the outside atmosphere definitely not into the roofspace. By allowing bathroom steam into the roofspace you will definitely end up with some sort of a condensation problem however by allowing the insulation to get wet you could end up with this moisture contributing to asthma and fungal infections with the growth of bacteria, mildew, mould causing Sick Building Syndrome as well as damage to the roofing materials.

However there are other problems caused by the supposedly energy efficient houses of today:- If you must have downlights make sure they are sealed at the ceiling, all protusions through the ceiling, such as ceiling vents, kitchen fans, bathroom fans, plumbing protusions, air conditioning and heating ducts and all like protusions should be sealed for leakage from the enclosed space.
By sealing the enclosed space from the roof cavity means that your home will be healthier and you will limit the access of heat from and to the roof cavity.

What you need to do - you will need to properly ventilate the roof cavity with effective ventilation as the Buddist Monks and Romans did thousands of years ago. You need to ventilate the roofspace with inlet vents to allow air into the roofspace and you will need outlet vents to let the air out of the roofspace, simple as that, air in air out. However, these inlets and outlets need to be within the roof covering to give the greatest effect so a series of inlet and outlet ventilators at acceptable intervals will give the desired effect. This will allow the roof cavity to breathe on its own, allowing the ambient temperature to flow through the roof drying out any condensation caused by the build up of heat between the insulation and the roof covering which naturally occurs due to being totally enclosed however further exsaserbated by allowing air from the enclosed space into the roofspace via ceiling vents, bathrooms, kitchens etc. Drying out the roofspace cooling the home in summer and allowing it to be warmer in winter. WHAT MORE COULD YOU WANT.

We can solve the problems of heat, cold and condensation with our Universal Tile Ventilator System and our Smoothline System for corrugated colorbond.

We have been building houses for hundreds of years with a cavity air gap of approximately 50mil or 2” if you prefer, between 2 layers of brick wall or with a brick veneer home of timber frame and an outside layer of brick etc. This cavity in between is therefore a reason to allow air to pass up between each layer, especially in older houses where this design is meant for the air from the subfloor to pass between the two layers of the wall and out through the roof – makes sense doesn’t it?

Until some insulation company comes and fills it with insulation fibre and blocks the air from the subfloor – what sort of problems do you think this can cause? All this does is make the insulation company rich and does nothing to further insulate the home rather causing more unwanted problems of sub floor dampness and increasing problems in the roof.

This is just another example of bad building practice and rorting the homeowner.