PRECAUTIONS FOR PUTTING UP CHRISTMAS LIGHTS 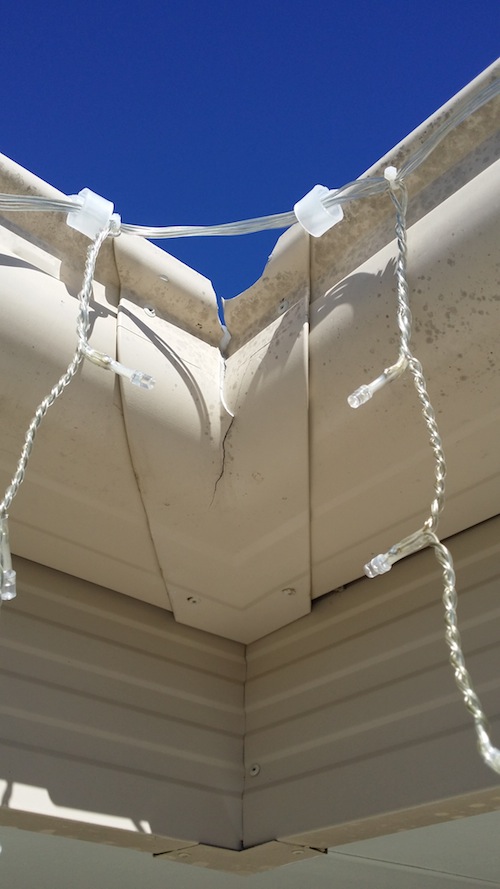 This is what happens when you rest your ladder close to pressed or cast angles. They just can't take the pressure.

So you are going to place Christmas lights around your guttering, you are going to have to practice some preliminary cautions - due to the fact that manufacturers of rainwater products such as guttering, guttering brackets and gutter angles – all in the name of profit - are making products that suit themselves not the end consumer.

They, the manufacturers are making and spruiking the use of internal brackets, pressed or cast angles. So what is the problem with these products, well internal brackets are not as strong as external brackets they also allow leaves to block up and dam the guttering and if you place your ladder in between the brackets the gutter will bend easily and depending on your weight can easily disform. If you place your ladder close to a pressed or cast angle it could quite easily break as seen in image.

So what are the precautions for hanging Christmas lights or cleaning your roof gutters – make sure you place your ladder directly over a gutter bracket so it won’t permanently distort or worse still could slide away and cause an injury. Make sure you do not place your ladder near a pressed or cast angle as shown as the pressure of the ladder and your weight is highly likely to break the angle literally or at least cause the angle to leak. These pressed angles are just not good enough as they have a very bad record for eventually leaking.

Most new homes have internal brackets (which I call infernal brackets) and pressed angles – so practice caution if you don’t want future problems.